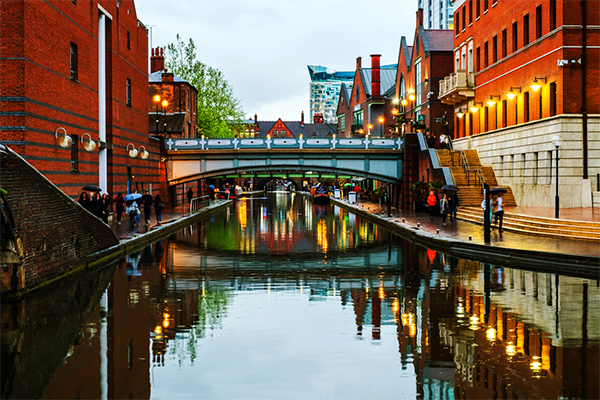 A major manufacturing center during England’s 18th century Industrial Revolution, Birmingham today retains much of the infrastructure from its industrial past. The city’s former factory and mill buildings house offices, retails shops, and residences, while Birmingham’s large network of canals — once used to provide water power to its factories — provide a scenic backdrop for cafes, restaurants, and nightlife.Birmingham is also known for its culture, particularly for the many internationally known musicians and rock bands that have come from the city. Groups such as The Moody Blues, Black Sabbath, Judas Priest, and Led Zeppelin all called Birmingham home.The city is home to a vibrant nightlife scene and host several annual events and festivals, including the Birmingham International Tattoo military tournament and the annual St. Patrick’s Day parade, which is the largest in Europe after Dublin’s.Flights to Birmingham are available via Birmingham Airport (BHX).Make getting to Birmingham as much fun as being there by booking discount first class or business class airfare with TopBusinessClass. Call or email one of our travel specialists today at (877) 784-0702 or info@topbusinessclass.com, or fill out our easy to use form.
explore top